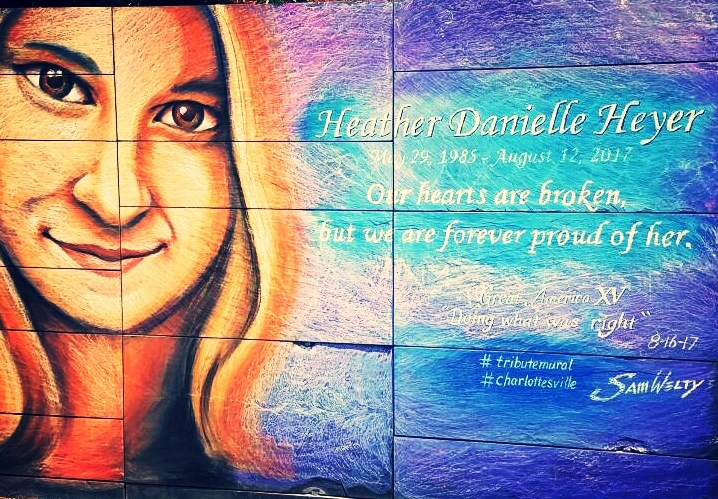 Her name is Heather Heyer.

She was a young woman born in Charlottesville, Virginia
Who loved her city, the color purple (the actual color-not necessarily the movie) and standing up for equality.

Heather Danielle Heyer.
That is the name of a woman who bravely joined the resistance against bigots and neo-Nazis and was killed by a coward from Ohio who drove his car into the crowd that she stood with.
She woke up one morning to be a loving ally against discrimination but sadly would end the day as a symbolic martyr in the struggle for America’s conscience.

When I heard about the horror in Charlottesville that took Heather’s life
and mamed so many others, I wasn’t surprised.
White supremacy is a poisonous drink that has been brewing in this country for centuries and the political rise of Donald Trump has introduced a new layer of racist fermentation.  It is my experience as a Black man, my knowledge of America’s history and this present political moment that allow me to understand that this country has always had the capacity for this kind of senseless, hateful violence.

But when I saw what happened in Charlottesville, it struck a chord of human empathy but much deeper than that, it stirred feelings of personal pain.
I could have been Heather that day.

I have engaged in numerous marches, rallys and other protestant acts of civil disobedience.
What happened to Heather, could easily have happened to me.

It could have been me.
That realization in addition to my deep gratitude for her selflessness are what compel me to acknowledge Heather  in the way that she deserves.

Heather died at the hands of a heartless coward, but she lived her last moments on the front lines of social justice.
She was able to step outside of the comfort of her own privilege as a white American and became a genuine ally of equality.

I don’t mean to over-romanticize  the impact of her passing.
Her parents lost a child. Her friends lost a dear sister.
The trauma of such loss shouldn’t be diluted.

But there can be some positives to emerge in this moment.
Her life can be used as a source of inspiration for those white Americans who were previously too numb to get involved and rise out of there complacent silence.
Her life should also serve as a reminder that there are many people of all shades who, like Heather are aligned in the pursuit of fairness and equality.

American silence and complacency are two obstacles that make the struggle for justice much harder than it already is.

It is incredibly necessary for us to continuously criticize and challenge the apathy of white Americans who condone and rationalize the mistreatment of people of color.
However, it is also imperative that we shine a light on those like Heather who are actively doing their part to dismantle racist power structures and who unequivocally affirm that BLACK LIVES MATTER

Yes- Our mission is to crush the walls of discrimination with vigor.
Our calling is to be brave enough to go into the soulless caverns of evil and annihilate systems of prejudice.
But we mustn’t stare so long or too deeply into the abyss of evil darkness that we forget to look toward the lantern of love & justice that guides us through the dark.
Shaming and challenging vile racists shouldn’t preclude us from recognizing the collective efforts of those who actually care.
America is a tragically long way from racial reconciliation but
we are not as alone in this thing as we may often feel.

But while fighting like hell against those who oppose us, we can also remember to raise our voices to the heavens in celebratory acknowledgement of those who stand behind us and step outside of their own comfort in the name of love, peace and justice for all.

To my sister in the struggle.
Your body may have fallen, but your spirit stands tall
with the love that you’ve left behind.

please note: the beautiful tribute mural featured at the top of the page is by Virginia based artist Sam Welty. Click here for more info on him and his work.
Follow him on instagram here

(theconsciencecloud.com is in no way a sponsor of or sponsored by Sam Welty. It is only our desire to give appropriate credit and praise to the artist)